We are based mainly in Gothenburg (Sweden) and the Royal Botanic Gardens, Kew (UK).

Gothenburg is Sweden’s second largest city. Notwithstanding the long and cold winters, Sweden is one of the world’s most successful societies, boasting high levels of economic prosperity and quality of life. Gothenburg is situated on Sweden’s west coast and has a population just over a million people. The sea, the coast and beaches are a short tram ride from the centre, as are extensive forest nature reserves and leisure areas.

The Royal Botanic Gardens, Kew is at the forefront of plant and fungal science, as well as being a UNESCO World Heritage Site and a major visitor attraction. Kew also houses the largest and most diverse botanical and mycological collections in the world, with over 8.5 million items representing approximately 95% of vascular plant genera and 60% of fungal genera. Kew scientists have access to these unrivalled collections, along with state-of-the-art laboratory facilities and a network of over 400 collaborating institutions worldwide. Based on the edge of London, Kew benefits from being part of a hub of biodiversity institutions and universities in a vibrant city. 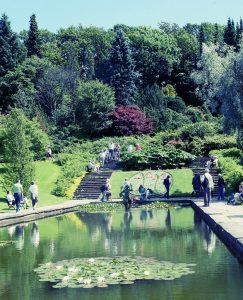