Between June and July 2019, six women biologist including masters, a postdoc (myself) and professors, travelled from Sweden, the US, and Colombia, to the biological station El Zafire, in the middle of the Colombian Amazon. El Zafire is home of the Tikuna, Muina-Murui (Uitoto) and Meamuyna (Bora) indigenous communities for whom vast territories of the Amazon are sacred. The name Zafire (or Varillal) comes from the word Uitotos use to refer to areas of white sand rich in pebbles. Since 2004, El Zafire has attracted a great diversity of scientists. Ornithologists, botanists, ecologists, from all around the world, have come to the station to monitor long-term vegetation plots, observe endemic and rare birds, and understand the biotic and abiotic dynamics of the forest. Our research team had the mission to collect and document individuals of the Amazonian palm Geonoma macrostachys, an understory species distributed throughout the Amazon.

Geonoma macrostachys is interesting because of its leaf shape variation. Some individuals have entire leaves (G. m. macrostachys), while others have divided pinnate leaves (G. m. acaulis). Despite this marked phenotypic difference, genetic data suggest that individuals belong to the same species. Phenotypic differences can arise through plasticity or adaptation. Phenotypic plasticity has the same underlying genotype (an individual’s set of genes) that produces different morphologies depending on the environment. Adaptation, on the other hand, promotes the fixation of the genetic differences underlying the morphotypes when these morphotypes are advantageous. Therefore, If leaf shape is an adaptation, we can (in principle) expect different genotypes if we compare the genomes of both morphotypes. If leaf shape results from phenotypic plasticity, the genotypes of different morphotypes would be the same. The final objective of our trip was thus to collect data to understand whether leaf shape variation in Geonoma macrostachys is adaptive or plastic. 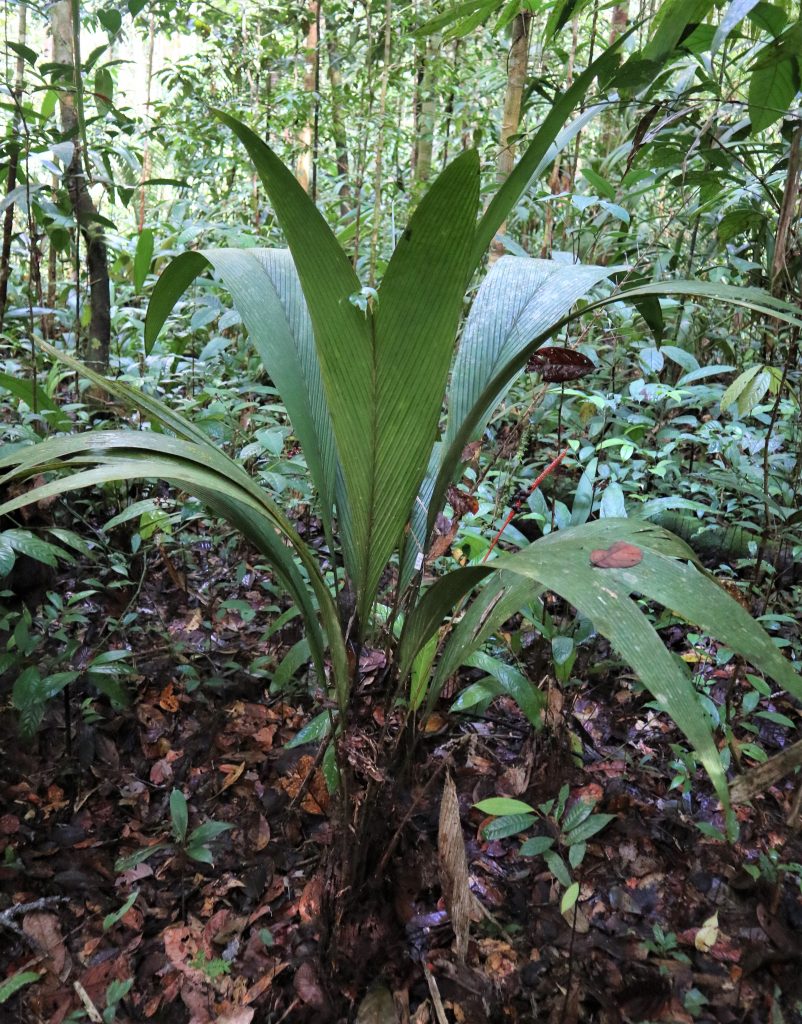 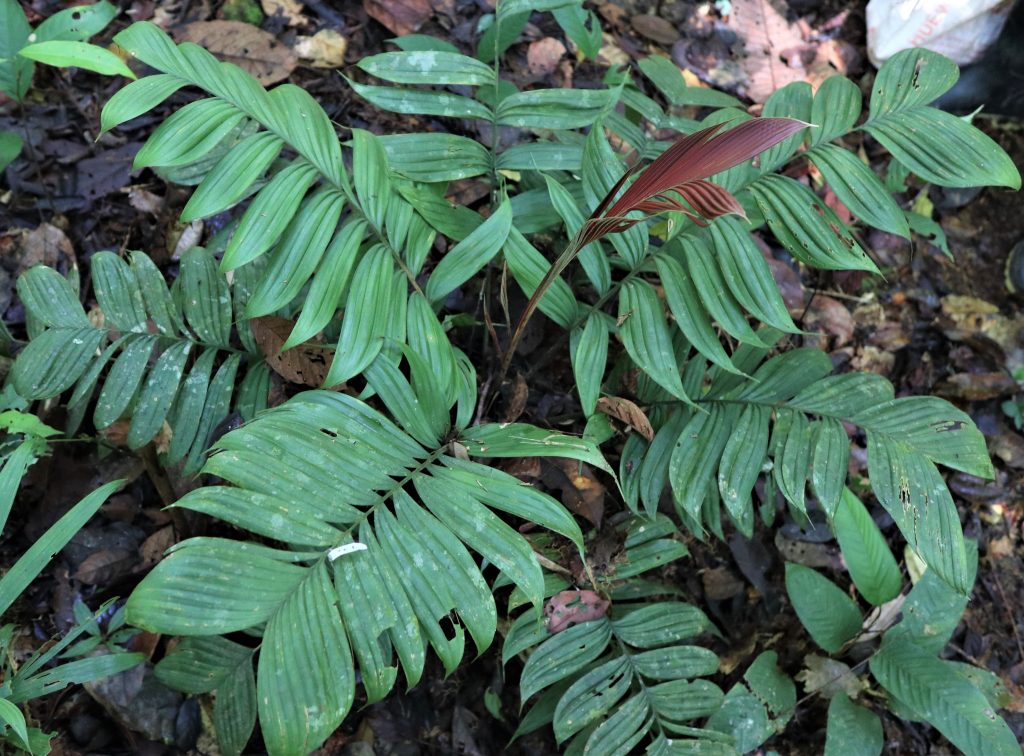 Individuals with both leaf shapes can be found at the Zafire station. With the help and guidance of the local guides (who made our mission possible), we photographed and collected leaves from ~400 G. m. macrostachys and G. m. acaulis individuals. From the tissues we collected, we extracted the DNA with the help of our Colombian collaborators at Medellin (Colombia). At Zafire, we also collected soil samples that were analysed by the soil laboratory of the Universidad Nacional (Bogota, Colombia). From these, we quantified the presence of nutrients (potassium, calcium, organic material, amongst others) to try to understand potential mechanisms by which soil could mediate the plant’s strategies to adapt to different places. 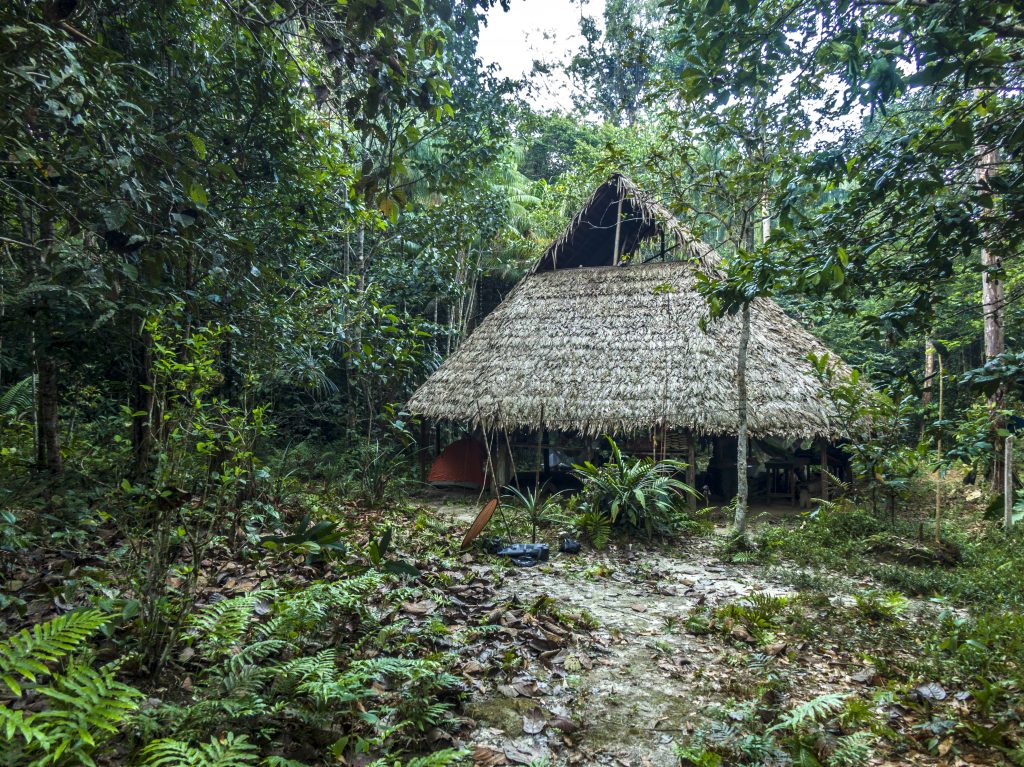 At Zafire, not everything was about Geonoma. We made friends with Miguel and Nelly, from the Muina-Murui and Meamuyna communities, who guided us through the forest and told us their stories during the two weeks we shared. During our daily walks, we came upon the footprints and leftovers of a jaguar that had been resting in the area a few days before we came. At the same place, we found the shed skin of a Boa constrictor who had been resting somewhere nearby. We also learnt how to weave the leaves of the Caraná palm (Lepidocaryum tenue) to build the roof of a new toilet that our guides built. The Açaí palms (Euterpe oleracea) around the maloca were in fruit, and every day after hours of walking, we enjoyed the juice of their fruits. We enjoyed the two weeks of sleeping at the maloca, listening to the unstoppable sounds of the jungle.